Welcome to Loose Ends and Stalling. My repository for scraps, sketches, card alterations, and general defilement of that which was once pure. Enjoy your stay, and be sure to deny all knowledge of this. Portrait night at @howardlyonart studio last night!  Playing the part of Howard, who is currently out at #GPBCN, was an extra-super-extended-version classic rock playlist.  We skipped the 47 minute Tom Petty cover of Inna Gadda Da Vita. This is one of my all-time favorite pieces, because of the way it came into being. At the IMC in 2010, I workshopped this with some of the greatest artists on the planet. James Gurney, Donato, Scott Fischer, Rebecca Guay, Jeremy Jarvis, Greg Manchess, and many more all had amazing insights for this piece. It’s a reminder of an incredible week with amazing people.

s
B2 months ago
Y
p34 Notes
rshare
A
0
SHORTLINK
tul
Not a question; but as someone who waited in line a couple times for 30 min to an hour I wanted to again thank you for all of your hard work and dedication this weekend at GP Vegas. I could see how hectic and overwheliming the crowds got at times and respect the toll that can take on anyone, but more particularity an artist. Thank you so very much for hanging in there and keeping in good spirits. I know we the fans greatly appriciated it, you are as amazing as your work good sir!

Thank you so much!  I try to do as much as I can, and I really appreciate that you are willing to battle with lines just to see me.  Thank you! Sketch n’ Skotchers, you’re the greatest! They surprised me on the stream last night with birthday cards! <3 <3 <3 Love you all! I’m pretty sure the request was “Liliana in a hen and tie.”  I think…  It was loud at the GP.  But I’m positive this is exactly what was expected.  Nailed it! I was playing the Sealed Event on Saturday which really cut into my time to get alters.  I may have to adjust my priorities next year and not do a main event or earn byes so I can start later in the day.

I got to the door early and got to Steve’s booth as soon as the doors opened, but I didn’t really know where it was so I spent a few minutes looking and was second in line.  The person ahead of me was only planning on getting his Lili signed, but I convinced him to go with an alter and showed him my Tumblr and all of the ones I have done.  Eventually he went with a double and if I remember correctly it was a Dark Fae, but I never got to see the finished work.

Luckily for me I was the first to present the new Brightling and Spellweaver Duo to Kat.  I don’t know if they are the first official alters on those cards, but they were only released 6 days earlier and there was nobody altering them in line before me.

Both came out amazing.  I especially love the aliens and how happy they are on the Duo.  The coolest part of that alter is that he used silver ink/paint and it really has a great spaceship look and feel.

I also got to meet TeamOgrePanda and see Scott from Sketch and Skotch again.  I also helped to hold up the fixtures for the metal prints while Kat and Scott fixed the levelness and taping the feet down.  This may have been the reason I got to do the alter I wanted on Sunday…

I also got to meet the some Sketch and Skotchers/MInio ns in Keeson, Andy, and a Minion from Brazil (sorry I don’t remember his name).

TeamOgrePanda informed the Sketch and Skotchers that there would be a surprise for them us Friday.

I think I was second in line again, but this time I got there a little later so no big deal.  I chatted with some of the same minions and got alters done which were chosen by my children.

TeamOgrePanda showed up with “No Horses” shirts.  If you haven’t been watching sketch and skotch it has become a running gaga to try and get the skoodle to be horses.  I especially like horses with hands but many watchers don’t like drawing horses and Steve doesn’t either.  They had also printed stickers which I proudly wore all Friday, Saturday and most of Sunday, until it fell off somewhere.

I brought the booth most of a case of water so that they could stay hydrated.

Angel Token - Sephiroth from FF VII, although the wing is normally black

As you can see, they both came out well.

Main Event, no alters, sad asrttyoxo.  Although I did still stop by and say “Hi” multiple times.

This was the last day and the whole team showed up with the “No Horses” shirts.  I had already planned on getting my Chaos Maw altered to be a “Horse with Hands,” so I was hoping that the rule could be looked past for me.

On Sunday I met a bunch of Minions I had never met before.  I met the Minion(s) who ran Hive Alpha, a Minion from Belgium, the Minion from Brazil again, and some other Sketch and Skotch Minions.  We had a great time telling stories about alters and how we came to find Steve and Kat.  I got to see a great collection of alters from an Ascended MInion that have only been seen by a few people.

We spent 2 hours together just chatting.

Because I had to catch a flight at 6pm I wanted to get an alter and an Artist Proof Sketch.

Sunseed Nurturer Artist Proof - I asked for a sketch of Liliana Painting a Beast so that it could match my Chandra painting a beast, but it got confused in tranlation and turned into an alter of Liliana painting a beast.  I will still get the sketch, but it will be on another AP I think.  It still turned out awesome.  That Lopalop Beast is adorable.

Check the old school signature too.

I asked for a Horse with Hands.  Four shirts clearly said no horses, but Kat wrote it down anyway.   What I got was Picasso’s Guernican Horse done in the style of Dali.  As you can see the horse is clearly not happy with being drawn with hands or he may be using a special code to tell me that he loves me.

You can see that Steve signed to the best of hi s ability Picasso and Dali’s signatures with his.

Everybody enjoyed seeing this one in the booth, and Steve did an amazing job.  This is one of the prized pieces of my collection.

Thank you Kat for passing it along and Team OgrePanda for your help making sure Steve got this to me on time.

Thanks to Steve for being so awesome about altering a horse with hands.  Although it just may promote me to ask for more horse alters now. “Skywiggler Airlines.” Brought to you by Clampzerker dangerously tenacious hyper-glue. Custom playmat from the GP Vegas pre-orders.  Next pre-orders will be for Gen Con opening July 1st.  Historically, they fill up fast, so mark your sundials! Clumsily trying to capture some of the majesty of the beautiful @chrisrahnart Lyra Dawnbringer.  My Beloved Minions had a ton of great ideas for alters at GP Vegas this year.  Which I often and eagerly steal credit for. ;)

Mark Aronowitz is an artists’ agent for MtG illustrators.  He performs quality service and in my opinion his prices are perfectly reasonable.  But just so you are aware, he will no longer be accepting requests for Terese Nielsen or Steve Argyle signatures as they do not allow for him to drop off cards for later pick-up.

I had to wait for 3 hours in Seattle for Magali and 2 hours for Steve and that was just for my stuff. Ain’t nobody got time for that

I swear when spoilers are going on I have to check every Magali Villeneuve illustration credit to make sure it isn’t Steve.  At card size, on screen… their styles and techniques overlap a lot.  I’ve been tricked briefly before.

As you can imagine, when there’s a long line, the question we’re asked most is “can I just leave my cards here and pick them up later.” And you can probably extrapolate how big of a mess that can become if we do that for everyone. So our policy is no dropping off signatures, and we don’t do different rules for different people.

Oh yeah, I knew this right away… just a PSA.  I think this is reasonable - if occasionally unfortunate.

But the bigger thing is that, if you want signatures through the mail: just send them to me.  I’ve done signing through the mail for over ten years now, and I don’t charge anything for it.

Mark Aronowitz is an artists’ agent for MtG illustrators.  He performs quality service and in my opinion his prices are perfectly reasonable.  But just so you are aware, he will no longer be accepting requests for Terese Nielsen or Steve Argyle signatures as they do not allow for him to drop off cards for later pick-up.

I had to wait for 3 hours in Seattle for Magali and 2 hours for Steve and that was just for my stuff. Ain’t nobody got time for that

I swear when spoilers are going on I have to check every Magali Villeneuve illustration credit to make sure it isn’t Steve.  At card si ze, on screen… their styles and techniques overlap a lot.  I’ve been tricked briefly before.

As you can imagine, when there’s a long line, the question we’re asked most is “can I just leave my cards here and pick them up later.” And you can probably extrapolate how big of a mess that can become if we do that for everyone. So our policy is no dropping off signatures, and we don’t do different rules for different people. Vin and Lady Valette, one of the very first Brightling card alters, and poetically appropriate in my opinion. “You guys know I can move things with my mind, right?” Unobtainium card alteration from GP Vegas. (Sold) Minion 335 here with the first alter I’ve ever purchased. It’s Steve cosplaying as Liliana and it’s the most wonderful thing I’ve ever spent money on in my life.

:D  A fantastic idea, and one of my favorites!  Thank you so much! It’s not easy being green.  But it is made somewhat easier when you’re rocking an invulnerable Olympian physique and able to juggle tanks.

Thank you so much to everyone who made #GPVegas such an amazing experience! Thank you to the players, judges, @channelfireball, my fellow artists, @wizards_magic, @ashlenrose and fellow cosplayers, my Beloved Minions, and especially my Lord and Dark Queen Caffeine!  Couldn’t have done it without you! 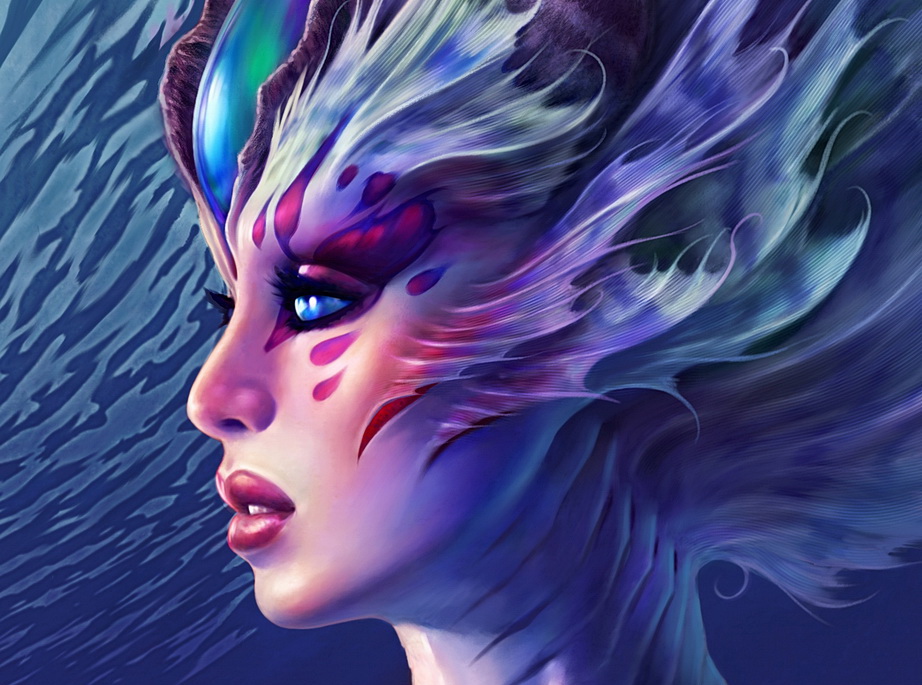